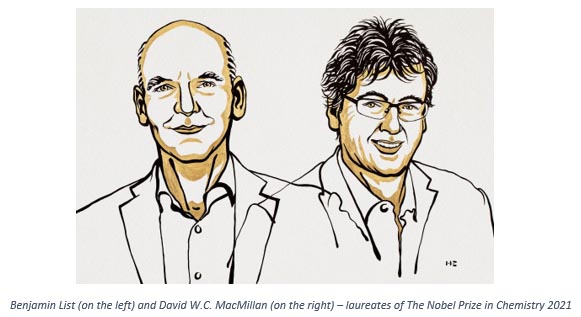 Most of Nobel Prize awardees nowadays are of a smaller general interest (at least in Poland) than those in the past, especially such renowned figures as Marie Curie-Skłodowska or Albert Einstein. The last time Polish people showed a greater interest in this matter was when Olga Tokarczuk (a Polish) received the Nobel Prize in Literature in 2019. Nevertheless, when asked, only few people would be able to name prize winners other than the most famous or those who come from their homeland. So, let me help you find out something new to broaden your horizons. Without further ado, I would like to introduce you to organocatalysis – a field of chemistry which gave Benjamin List and David W.C. MacMillan the Nobel Prize in Chemistry 2021.

Firstly, to give you a glimpse on the topic, let’s explain the term organocatalysis. Simply put, it is focused around researching potential applications of quite simple, low-mass organic molecules in reactions which need to be catalysed (sped up) in order to produce satisfying yield (a percentage of obtained product, compared to theoretical mass). The whole concept is quite simple: we use substances classified as organic to make chemical processes more efficient. But there’s more to it than meets the eye. Not only does it do that, but it also has two other advantages over the old-fashioned catalysts: it makes the reaction yield only the wanted product and be less energy-consuming, thus more eco-friendly. For the sake of clarity, I will only ponder on the last two aspects in what follows.

In the organic chemistry a few molecules are as flat as a pancake. Many substances, such as proteins, can take very complicated three-dimensional structures. This fact gave rise to a chemistry field called stereochemistry. One of the most important concepts developed by it is chirality – property of molecules to be in form of two non-identical mirror images. This might seem like a fact that has no real implications observable in everyday life, because why would location of atoms in space make any difference? Shockingly, this distinction might mean for instance lethal or therapeutic effect of a drug as in case of thalidomide (one enantiomer, a mirror image, can give birth defects while other prevents morning sickness). Another example emerged during the Nobel Prize ceremony (as “a justification for rewarding the chemists), when the speaker mentioned a substance called limonene, present both in lemons and oranges, giving them their characteristic smell. Depending on which enantiomer (mirror image) is present, we can sense the smell of orange (R-limonene) or lemon (S-limonene). Now you understand why it’s so crucial to produce only one enantiomer during a reaction. Not only does it save time and reagents used to separate one product from another, but it also decreases the amount of chemicals wasted on production of unwanted molecule. Hence the increasing popularity of the process, with its profitability added to not less important value of natural environment protection potential.

The aspect of better energy and molecule economy was also decisive in the Nobel Prize success. Compared to classic synthesis routes requiring oftentimes enzymes, proteins with mass of thousands of molecular mass units, using simpler chemicals, such as naturally occurring amino acid called proline (whose mass and number of constituent atoms are far smaller than of the enzyme) saves a lot of atoms which would normally be disposed of after finishing the process. It goes without saying that not all of the reactions are favoured. As an example, you can name Benjamin List’s first organocatalytic rection, which gave rather poor results. In spite of this miniscule-seeming success, many continued List’s research and found catalysts that are even better than enzymes.

In the article I aimed to explain briefly what organocatalysis is and why is it of such a great importance that two chemists got awarded the most prestigious title in world of science. However, why is it an almost obvious concept? Even for those interested in this field, going through the research behind this discovery is more or less of a painstaking labour. However, when Benjamin List was asked how he came up with the idea for his research, he responded that at first he thought that what he came up with was nothing new and it must have been documented in other scientific publications. To his great surprise, there was no mention of such reaction in any papers he had browsed through. This story, to my mind, truly proves that nothing should be treated as obvious and your ideas, no matter how cliché they seem, might turn out to be revolutionary. 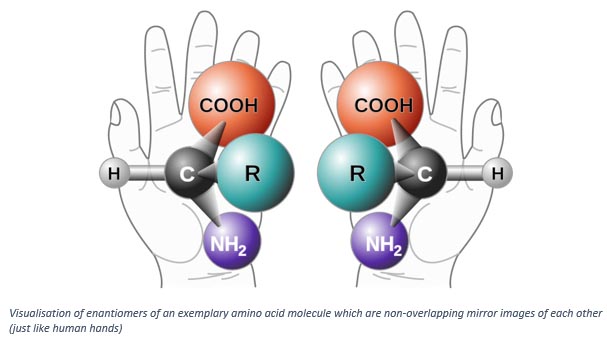 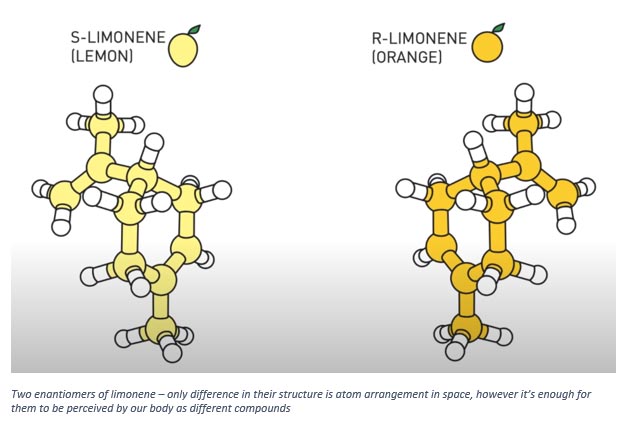