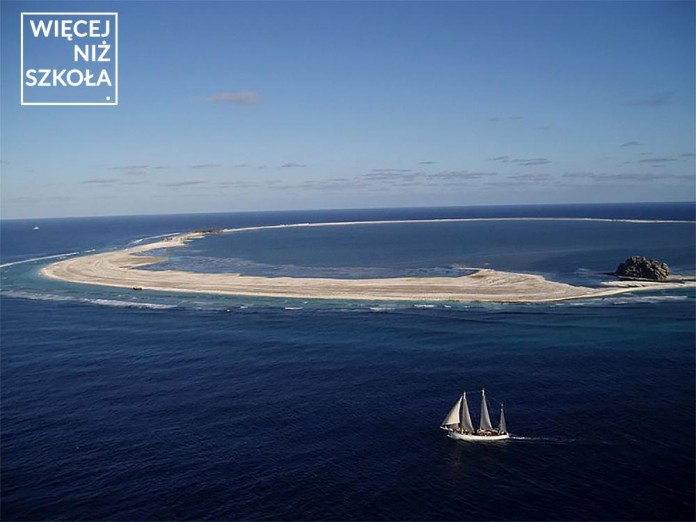 On the Pacific Ocean, around 1 080 kilometres from the coast of Mexico, there is a small atoll called Clipperton Island. With a surface area of 6 square kilometres, mostly taken up by lagoon, and average elevation of 2 meters it would barely be noticeable if it wasn’t for a small volcanic outcrop of 29 meters called Clipperton Rock. It is isolated from any other land, with Socorro Island being the closest at 945 kilometres.

It is believed to have been discovered on 15 November 1528 during Spanish expedition that was meant to find a route to the Philippines from newly conquered Mexico, but it could have been discovered much earlier in 1521, by Magellan’s mission to circumnavigate the globe. The island was rediscovered on 3 April, 1711 by the French. It was called Passion Island, because the day was the holiday of Great Friday. The modern name is in honour of John Clipperton, who was an English pirate believed by some to use the island as the raiding base. The island was claimed by three countries: France, United States and Mexico. Today it is internationally regarded as a part of French overseas territory, owing to international arbitration by King Victor Emmanuel III of Italy in 1931. But the most famous piece of history related to the island has no French involved, but Mexican military garrison. In 1906 British Pacific Island Company acquired the rights to the guano deposits on the island from the Mexican government. A mining settlement was built, as well as a lighthouse, on Clipperton Rock. At the outbreak of World War I, around 100 people were living on the island. It was around this time that the ship resupplying inhabitants of the island stopped appearing, due to the evets of Mexican Revolution. Captain Ramon Arnaud, who was responsible for the island, refused to leave it at first, but in 1915, when a scurvy broke out due to the lack of supplies and many people died, he tried to establish contact with a ship passing by, but failed and all were drowned by the wave. This meant that the only adult male left on the island was a lighthouse keeper, Victoriano Alvarez. He seized all weapons on Clipperton and began his rule of terror. He claimed that no woman was to leave the island alive and demanded their sexual services, killing them if they refused. But things changed on 18 July 1917. Not only did the Alvarez die, killed by Tirza Rendon, his favourite victim, but also the remaining victims were rescued by American ship named Yorktown, which sailed there in search of enemy Germans. Later, the island was occupied briefly by US during World War II. Some pieces of equipment, such as old jeeps and stacks of munition, are still on Clipperton to this day. No permanent settlement  has been established ever since.

Waters around Clipperton island are rich in various marine species. Dolphins, manta rays and hammerheads can be found on the reef  around the atoll. There is also a dense population of moray eels, which sometimes even venture onto the land. There are a few land species on Clipperton, with most noteworthy being the Clipperton crab, whose population is counted in millions. It is omnivorous – eating everything it can, from algae of lagoon, through small saplings to carrion, including dead members of its own kind. This means that the only flora on the island are coconut trees and some shrubs on the north-west Lagoon itself are quite interesting as well. There is hardly any life in it with exception of some isopods, as it is covered mostly by decaying plant matter. There is so much of it that water at the bottom of ancient volcano, seen as a black dot on the map, is strongly acidic. Clipperton is also known for its enormous bird population, something noted even back in 16th century by the Spanish. It is a nesting ground for sooty and white terns, various boobies, and great frigates, with scientists noting 110 000 individual birds.

Aim High Magazine #61: How about holidays in Sicily?