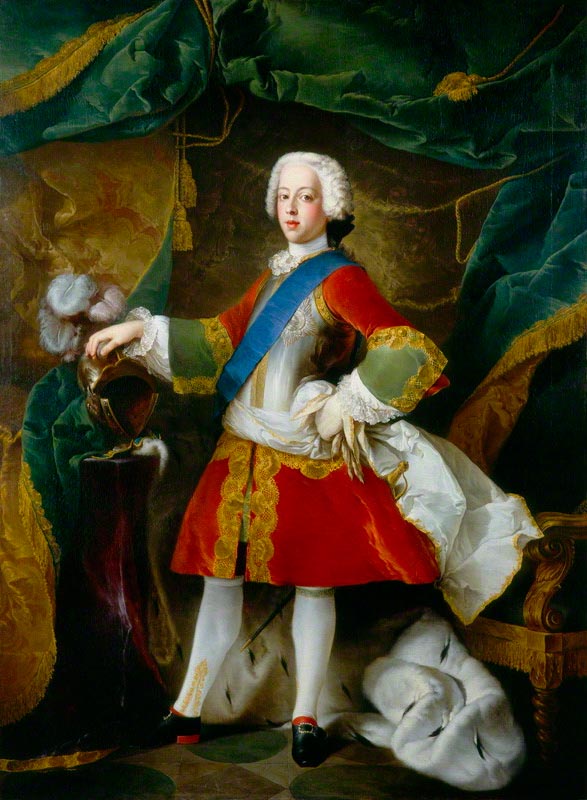 One of most romantic figures in history Europe, at the heart of a tragic tale of loyalty and devotion. The Young Pretender led a futile quest to save the very soul of Scotland.

Charles Edward Louis John Sylvester Maria Casimir Stuart, for that was his full name, was the elder son of James Francis Edward Stuart and Maria Clementina Sobieska, grandson of James II and VII, and the Stuart claimant to the thrones of England, Scotland and Ireland from 1766 as Charles III. He was also known as ‘The Young Pretender’ during the final Jacobite rebellion of 1745. In popular memory, he is known as Bonnie Prince Charlie, due to his boyish look and natural charm.

Prince Charles Edward Stuart wanted to regain the Great British throne for his exiled father James III in the Jacobite Rising of 1745. After living most of his life in Italy, young and charming Charlie secretly set foot on Scottish land from France. His father, James Frances Edward Stuart, known as The Old Pretender, was living in exile in Italy after his own father James II was deposed and forced  to leave England after The Glorious Revolution of 1688.

We must remember that when Emperor Charles VI died in 1740, the tension mounted between Protestant England and Catholic (Jacobean) communities in Scotland and France. Charles’ desire to restore the throne for his father, the rightful king of England and Scotland, led him to plan an invasion of England and overthrow the current monarch – George II.

After a short period in France, following a failed attempt to gain support and money for the Jacobite cause, Prince Charles landed in Scotland on 25 July 1745. He quickly gained support from the Highlanders and his army successfully fought General John Cape’s men. I must mention that the Jacobites were all the supporters of King James VII of Scotland and II of England (the Latin for James is Jacobus), people from all around the Europe – not only the Scots. After the victory at the Battle of Prestonpans, Charles and his army continued the attempt to invade the city of London. However, they were forced to retreat to Scotland, after receiving reports of overwhelming armies prepared to defend the capital city. Charles didn’t give up completely and continued to lead his men into battles.

Nevertheless, after the crushing defeat of the Jacobites at Culloden Moor, Charles was forced to hide and become  the haunted man for the next five months. It isn’t really clear how he spent these months, but he disguised himself as Lady Betty Burke.

Eventually, Charles was rescued from Scotland by his brother and shipped back to France. Although they were still not prepared to support Charles’ claimant for the throne, they agreed to protect him.

In 1748, the war between France and England ended and the English insisted that the French exile Charles. He was forced to spend the rest of his life moving around Europe.  From 1783, ‚Bonnie Prince Charlie’ was ill and was nursed by his daughter until 1788, when he and died on 31 January, aged 68.

His legend continues, despite it being based on only one year adventure in Scotland.

Aim High Magazine #65: The Happiest Country in the World

Aim High Magazine #65: About the flags around the world.